Home > History of the FBDCA

In addition to the information below, we also recommend you read the AKC Gazette article, A Look Back, about the founding of the French Bull Dog Club of America.

Ears. It was a dispute about ears that prompted the founding of the French Bull Dog Club of America on April 5, 1897. American breeders were incensed that the English judge, George Raper, had put up rose-eared Frenchies at the Westminster Kennel Club show in February. 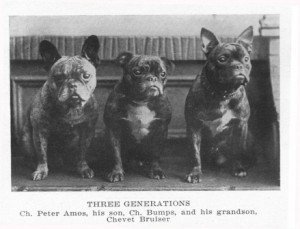 Most British and French judges favored dogs that, in effect, were toy bulldogs and that of course included the rose ear. There was no published standard defining the breed and no organization in America or Europe that was devoted to the breed so the Americans decided to organize and set the rule requiring bat ears as part of the new American standard. This was fiercely criticized by the French and British but the Americans stuck to their guns, so today the bat ear is universally recognized as a key element of a true French bulldog.

Members of the new French Bull Dog Club of America (FBDCA), men of wealth and prominent social standing, had made liberal trophy donations to the 1898 Westminster show and E. D. Faulkner, a club member, was chosen to judge the Frenchies. But the club was outraged when they discovered that bat-eared AND rose-eared dogs were to be judged. The Westminster club ignored the protests and so the FBDCA pulled its support of the show and Mr. Faulkner withdrew from the judging assignment. 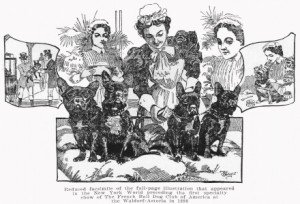 American club members, driven by consuming indignation, organized their own show to be held on February 12, 1898. This was the famous first FBDCA specialty, held in the sun parlor of the luxurious Waldorf- Astoria Hotel, amid palms, potted plants, rich rugs and soft divans. Hundreds of engraved invitations were sent out and the cream of New York society showed up. And, of course, rose-eared dogs were not welcomed.

It wasn’t until 1910 that the second FBDCA specialty was held although during the intervening years the club donated trophies to shows where Frenchies were judged by approved judges.

Thereafter, specialties were held annually in New York City and enjoyed good entries until the start of World War I. The club was dominated by prominent New Yorkers including a Belmont, a Whitney, a Roosevelt and assorted Vanderbilts. Honorary members included Elsie de Wolfe, a prominent interior decorator, much ahead of her time; and James Gordon Bennett, the colorful dog fancier, international yachtsman and owner of the New York Herald

Samuel Goldenberg was a prominent Frenchie breeder who was slated to judge the 1912 specialty. En route from France, Goldenberg was on the giant liner Titanic when it sank, a week before he was to judge. Both Goldenberg and his wife survived and arrived in New York just one day prior to the show.

In 1913 and 1914 the club published nine issues of The French Bull Dog, a magazine that contained a wealth of Frenchie- related articles and photographs. Publication ceased because of financial losses but these magazines provide the definitive picture of the gilded age of Frenchies. As one would expect, copies of these magazines are highly valued by collectors today. By 1925 the club had 86 active members and was doing well enough that, along with the French Bulldog Club of New England, published the milestone hard-bound book, The French Bulldog. It contained articles from the old club magazine plus material including drawings and photographs that are still widely reprinted today. The selling price was five dollars, a tiny fraction of what a used copy is worth today.

The FBDCA suffered during the Great Depression of the 1930s along with the rest of the country. Membership declined and only a last minute canvass of members enabled the club to hold its 1931 specialty. Classes for white, pied and fawn Frenchies were included for the first time. After years of being held in New York, the 1933 specialty was held in conjunction with the Morris and Essex show on the grounds of Mrs. Dodge’s estate in New Jersey and continued to be held there through 1941. The 1939 show had an entry of 100 Frenchies, the largest in many years. The price of The French Bulldog book was reduced to $3 in order to stimulate sales.

During the World War II years the FBDCA specialties were held in conjunction with the Westchester Kennel Club shows. Show entries and club participation were down sharply as America put priority on the great war effort. The club survived the war and the postwar years, but just barely. Membership hovered around fifty dues-paying members and specialty show entries were usually only a few dozen or so. The club’s leadership, dominated by eastern breeders, continued to resist holding the annual specialties outside of the New York-New Jersey area.

By the late 1970s the club had over 100 members. An independent breed publication, The Frenchie Fancier, publicized Frenchie activities around the country and, later, The French Bullytin continued to encourage the transition of the FBDCA into a truly national club.

The 1980s brought forth significant changes. The 1984 specialty was held in conjunction with the International Kennel Club in Chicago, our first specilty ever held outside the New York/New Jersey area. The specialty returned to New Jersey the following year but in 1986 it was in Edwardsville, Illinois. The show was rotated around the U.S for the next twenty years and the club became truly national with breeders, competitors, and fanciers from all areas participating in club activities. Club membership and show entries increased sharply. The FBDCA Centennial Show held in Overland Park, Kansas in 1997 had a record entry of 303 Frenchies.

The club’s activities have expanded to include rescue, breeder and judges education, public education, health surveys and support of health research through the Canine Health Foundation. The need for these was becoming critical as the popularity of French bulldogs grew. Current club membership totals over 500 but we shouldn’t forget those breeders of the past who kept the FBDCA going through the lean years when only a dozen or so would meet regularly to conduct the club’s business. John Haslam, Fred Hamm and Peggy Clark Kelley were long-serving club presidents (nearly fifty years between them!) and one cannot overlook the Hovers. Helen Hover served thirty years as club secretary and her husband Dick was the club’s AKC delegate for over thirty-five years. Let us hope that our efforts on behalf of this wonderful breed of dog are worthy of these pioneers of our American club.